Terry Wragg & Jez Coram, 2014
16mm colour, digital sound
100’
An experimental collaboration between Jez Coram and Terry Wragg, exploring the theme of privatisation. It combines separate pieces of film that have all been stored for some time under the same roof: found footage of a Rolls Royce turbo jet engine –
some of it distressed by the artists - together with excerpts from 'Council Matters', an animated film produced on 16mm in 1984.
Rolls Royce was privatised in 1987 during the premiership of Margaret Thatcher. Its aircraft division, Rolls Royce PLC, went on to become the world's 16th largest defence contractor and a multi-billion pound company. “Council Matters” is a film about
local government produced by Leeds Animation Workshop, a co-operative of which Terry Wragg is a founder-member. Rise and Fall is about perpetual motion and entropy: it relates to the interventions of political governance and their impact on
the history of machines and industry in Britain.
PREV / NEXT   11 / 16
BACK TO ARTISTS OHF III 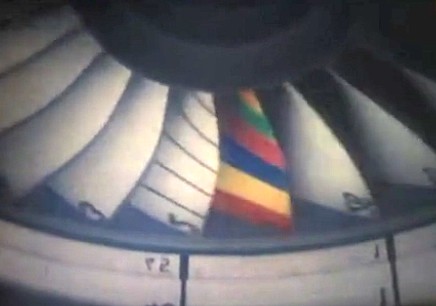