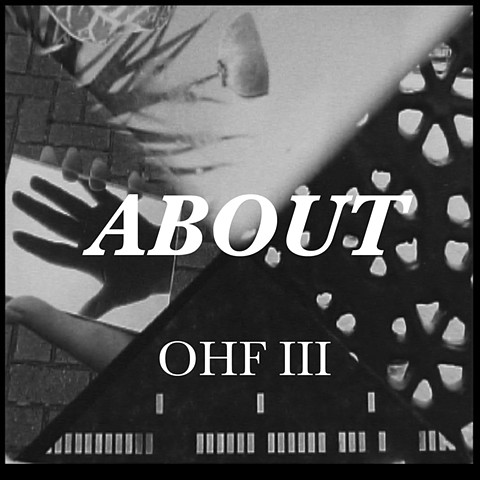 ONE HUNDRED FOOT III
CALL OUT

After the initial successes of ONE HUNDRED FOOT I & II, a third installment of this curated 16mm showreel is set to commence yet again. Over the past two years, the ONE HUNDRED FOOT project has been screened in various galleries, festivals, museums and institutions in the UK, US, Europe, and Mexico. This year, Jim Hobbs, would again like to place a call out to artists and filmmakers who would like to submit a 100' 16mm film to be considered for this year’s ONE HUNDRED FOOT III program. However, as the secondary title suggests, works to be considered for this show reel must involve some form of COLLABORATION.

INFORMATION - BACKGROUND ONE HUNDRED FOOT is a working concept that has been developing over the past few years. It attempts to open up the debate around the current use of celluloid film in contemporary art and film practice, paying particular attention to the use of 16mm film. As an industry standard, 100 feet of film (approximately 3 minutes) is the given length for a small spool of 16mm film. This given/standard/restraint has been used by artists in the past and remains a pertinent form/format for creating films. Utilizing this number, a film can be conjured up within the parameters of two distant but specific points – 0 and 100. In understanding that film, as opposed to digital, is measured in this tactile and physical form of length, the filmmaker/artist must address the issue of time through the measurement of a material length. For some, this constraint is seen as a time limit; for others it can be seen as a finite amount of physical material in which to construct a work, similar to a sculptor’s material; and again, for others, their considerations may combine or reach beyond these deceptively simple approaches. The concerns around this issue are as idiosyncratic, subjective, and varied as the artists’ work itself - yet it is within this standardized and objective limit of 100 feet of film, that each maker must compose their subject matter through an exercise of economy. Whatever the filmmaker’s or artist’s intent, there is no doubt that this measurement of one hundred feet is an actualized consideration for anyone working with film.

CALL OUT - DETAILS Holding true to this interest, and while still being open to interpretation, Jim Hobbs is placing a call out to artists and filmmakers whose work deals with, questions, or falls within the parameters of ONE HUNDRED FOOT. From finished films, to cut up found footage collages, to unfinished sketches – these films need merely to fit within the notion of ONE HUNDRED FOOT. This year, works to be selected must involve some type of collaboration between a minimum of two people, but could also include group work. The notion of collaboration is open to interpretation, and each applicant is given the freedom to address this accordingly. The works do not need to be “new”, but could be a reconfiguring of older works asking another participant to interrupt or interject another aspect to the work. Of particular interest will be works, which also include some form of sound – this can be a digital file to be played along the film or an optical soundtrack. Of course silent films are always welcome. Approximately 20 works will be chose to form a select screening to be premiered at this year’s Latitude Festival on July 19th. Additionally, Jim Hobbs will set up various screenings and events throughout the year to allow the program to travel nationally and internationally to various galleries, museums, and institutions. For a look at the past two years of films and programme, please visit: http://jimhobbs.org/section/308307_ONE_HUNDRED_FOOT.html http://jimhobbs.org/section/363415_ONE_HUNDRED_FOOT_II.html

DEADLINE FOR ENTRIES Please submit your work (or proposed work) by July 2, 2013 by emailing Jim Hobbs at jim@jimhobbs.org. Works for review may be submitted in a variety of formats, preferably online via a web link (vimeo, youtube, artist’s website, etc.) or through Dropbox or similar. Physical copies, such as DVD or 16mm films may be submitted, but please contact first for a delivery address and process. The final selection of works will be decided by July 5th, and all applicants will be notified. Those selected for the screening will need to provide one print of their 16mm film by July 12th, 2014. Details of delivery address for selected films will be announced on July 12th.

CONTACT If you would like to submit your work for review, or have any further questions, please contact Jim Hobbs for further details at: Jim Hobbs